How to Cleric in Moog

This is a quick, down and dirty guide for Clerics and other faith-based characters in the World of Moog. It is written for 5E but much of it can be easily used for Old School version of the setting. OK, so maybe 1200+ words isn’t all that brief.

Human, Dwarf and Halfling Good and Neutral aligned PC clerics worship either The Five (The Gods of Law), one of the individual Gods of Law or the Mother Goddess C’pu (alternately named C’ephu). Halfling clerics being extremely rare will in almost all cases choose to worship Vat Oldy M’m. Heretics of the Ardahune (pronounced ard HOON, basically any human with levels in Barbarian) people of the North have different names for most of the Gods of Moog. Quite a few of their clerics worship Thaumus the Wanderer (similar to the Hindu myth, except in this case a rather viscous snapping turtle that rises from its sleep to lift the world of Moog, carrying it along on its back as it crawls across the Void) , The Great Dragon (actually Ourbosas the Dragon Goddess of Destruction) or Korn the God of Battle (Note that Korn is actually a despicable God of Chaos, but there’s no convincing the Ardahune of this). In all cases, choose whatever domains you wish as the faiths and Gods themselves are just not all that codified. The Gods of Law are completely disinterested in the affairs of men. The Gods of Chaos are far more active and seek to destroy and corrupt. C’pu and her mortal followers actively oppose them.

C’pu: Mother Goddess and Principle Deity of the setting, a typical Earth Goddess and a rare source of Goodness in the otherwise grim setting

The Gods of Law
·      Axyay Gr’gg: God of Sorcery and Treasure
·      Sear’n On: God of Knowledge, Engineering and Enlightenment
·      Helmso: The Bloody-handed God of War, Battle, often confused with Korn
·      Vat Oldy M’m: The Laughing God, God of Luck, Patron God of Halflings
·      Mentrekfranz: God of Valor, Patron God of Henchmen and Adventurers

Elves Good and Neutral aligned Elven PCs venerate all of the non-evil Godlike beings to varying degrees. Players may choose to worship the entire pantheon or pick from one of the divine beings discussed below.

Principle among all Gods is C’ephu al Lunanari whom the Elves hold in the highest regard. Ourbosas Balorian is considered a neutral entity, equal in power to C’ephu, and venerated for her Fire aspect and the life-giving gift of sunlight. Even more troubling to the other Good Folk is that Elves tend to admire and even share some degree of affinity with dragons. As the progenitor of all dragon kind, Ourbosas is viewed as a source of great knowledge and the deepest magics. Elves do not view her as a purely evil entity, and this of course is pure heresy in the view of Humans and Dwarves. Halflings are too busy eating and drinking to care.

Yet another heretical aspect of the Elven theological view of the cosmos, is that the Five (as they are known among the human and dwarven clerisy) are actually lesser beings known as Vylldane, still powerful, but no longer True Amesha. There are in fact, several additional entities known to Elves that humans and dwarves appear to have little knowledge. These beings are just slightly less powerful than the two Greater Amesha and are known as Dolor Ami.

Moreover, a close study of the Elven mythos suggests that the Elves see the world in terms of a strict hierarchy of sentient life, a pyramid scheme of sorts where divine and semi-divine beings attempt to work their way up the ladder of Ascension. A few of these ascendant Dolor Ami are held in great reverence by the Elves. Korenuos God of War and the Wilds, Yeeshan’th Goddess of Art and Music, Selsitheench God of Magic and Norlorg God of the Woods are the most prominent though there are a few others. It is not lost upon the clergy of Human and Dwarf that these entities are astonishingly similar to the four Ruinous Princes of Chaos. Elven clerics expect to be viewed with suspicion by clerics of the other races, but this doesn’t seem to trouble them. This is mostly due to the confidence, pure arrogance even, that the Elven view is far closer to being correct and that the others are simply jealous of the superior Elven standing in the great game of divine Ascension.

What About Druids? How Do They Work?

Druids are found mostly among Men and rarely among the other races (but hey this is 5E so it’s fine to roll up a cringe-worthy Dwarven Druid so we can all laugh at you). The druidic faith is very close to that of the Elves and in fact, the earliest druids were taught their faith by the Wood Elves of the Gloamingwood (pamphlets were most likely involved). Druids should pick either a lesser God detailed in the Elven entry above as a patron or Ourbosas or C’ephu. Druids of the Ardahune race of men usually choose to venerate Thaumus the Wanderer, but there are exceptions.

We Were Promised Paladins. There Are Paladins in Moog Right?
A few, yes, Paladins in Moog are either squeaky clean do-gooders (the Hands of C’pu) who follow C’pu and go about righting wrongs, rescuing princesses and the like or they’re fiery zealots (the Hands of Helmso) who wield their sword for the glory of Helmso. Members of the former are admired by all, with the noted exception of the Murder Hobos in an adventuring party who have to walk on eggshells around them. The latter are frankly terrifying to most folks and even the most pious among the clergy believe the Hands of Helmso take things a bit too far. Both have a Knightly Order located in Vermistadt and as knights they are afforded a wide degree of rights and privileges in the city. You should probably be playing a human if you’re a paladin but there could be rare exceptions.

And Rangers? Aren’t They Divine Casters as Well?
These characters are not necessarily a devout group, but they do know how to draw energy from the same sources of power that fuel druidic magics. Assume that your PC has more than a passing familiarity with the Druidic faith and follow the directions in the earlier entry for Druids. This faith would be actually quite strange for a Halfling or Dwarf, but those sorts of characters likely grew up in an extremely isolated and rural setting and knew only the druidic faith in their youth.

Closing Thoughts
It should be noted that in some cases, there appear to be holes in the belief structures and even conflicts among the Good Folk of Moog. This is by design as players and NPCs are not meant to know or even understand the fullness of the cosmos and its mysteries. Roleplaying in Moog occurs at a time of great, even appalling ignorance. Your PC might be certain of the correctness of his beliefs and outraged by the conflicting believes of others. It’s possible even that you’re not all that religious in the first place and are in essence a clever fraud. Alternatively, perhaps your PC fully accepts that ignorance is the lot of mere mortals and is completely open and accepting of all faiths of the Good Folk of Moog.

Random Doodle from my Portfolio 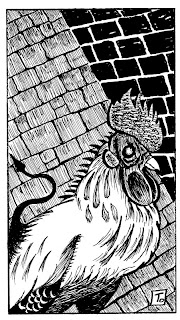 Awesome Stuff I Made for Your Campaign